Well, I have been awake since about 4am.  We have heard that it takes about 4 days to fully adjust to the time change.  Hopefully we will be in good shape by the time we get Hannah. 🙂

We had an amazing and PACKED day yesterday!  We started off on the bus, not really knowing where we were headed.  One of our guides, George (who is hilarious, and SO knowledgeable), talked the entire time we were driving, and cracked us up by referring to himself in 3rd person the whole time.  Finally he told us that George decided he wanted to take us to see a Chinese family.  We all unloaded the bus and each family got on a Rickshaw.  It was amazing!  We rode the rickshaws through areas of Beijing where we got to see where families live in China.  It was like a maze of alley ways, and families lived down each little corner. 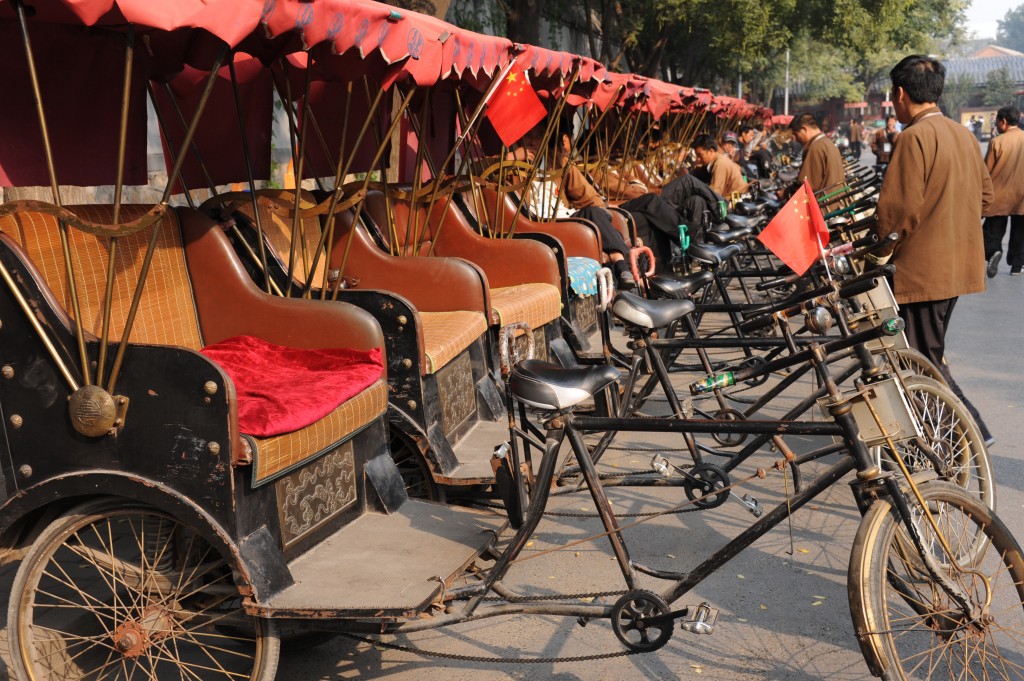 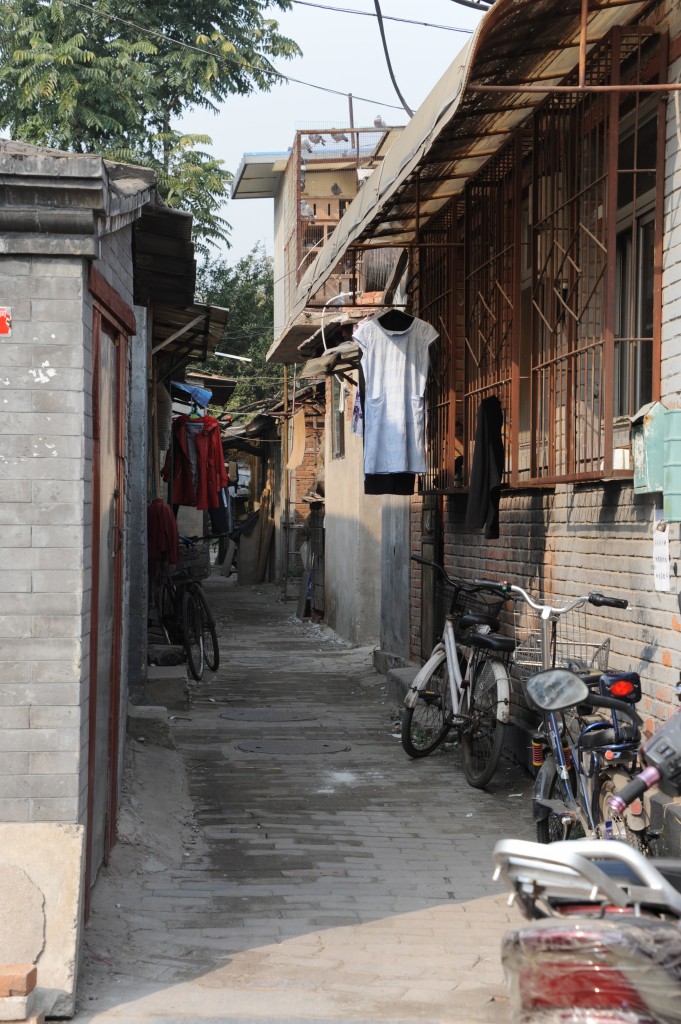 When we stopped, we went to a courtyard that was surrounded by a building on all sides.  A Chinese woman came to talk to us and explained that it was her home that had been passed to her from her grandparents.  She lived there with her daughter and son-in-law and  her grandson.  Her son-in-law is a famous artist in China, and also likes to race pigeons.  She allowed us to walk through her home and ask questions. 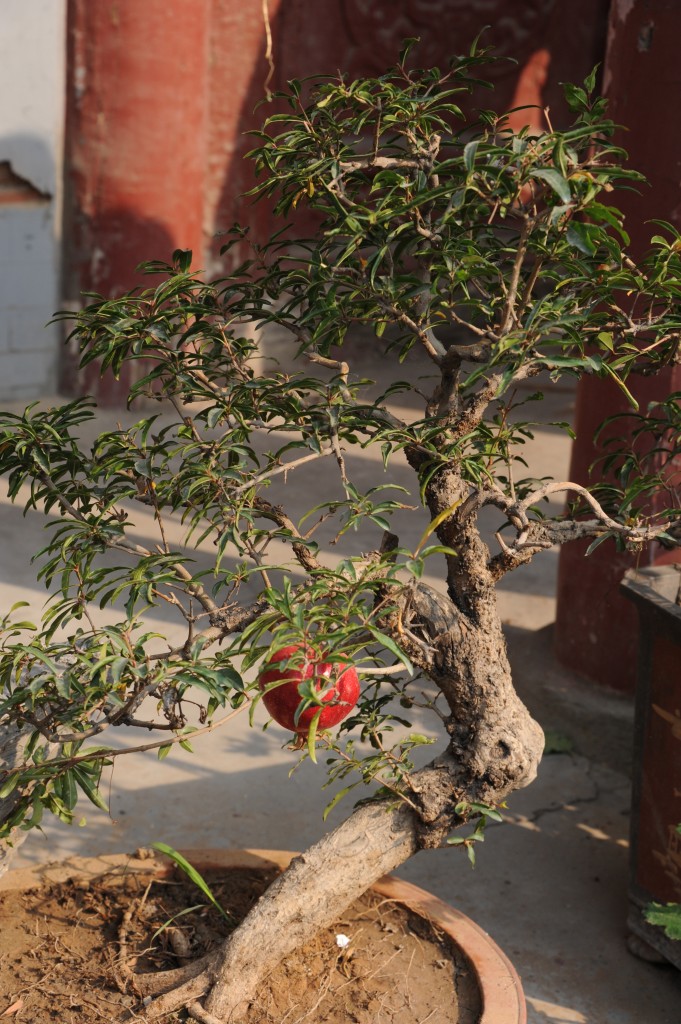 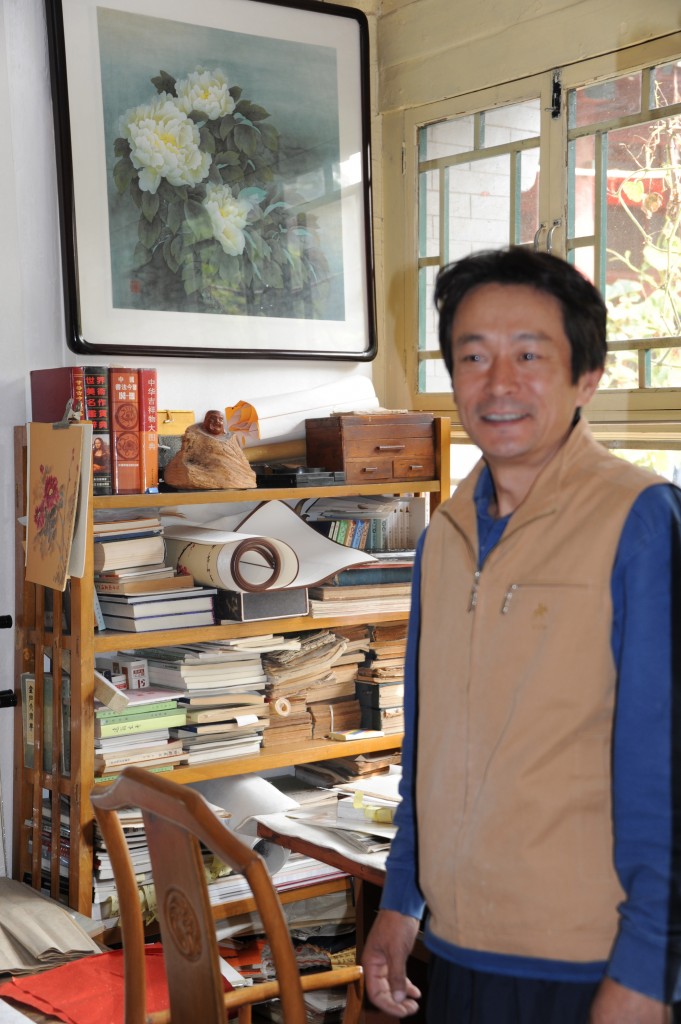 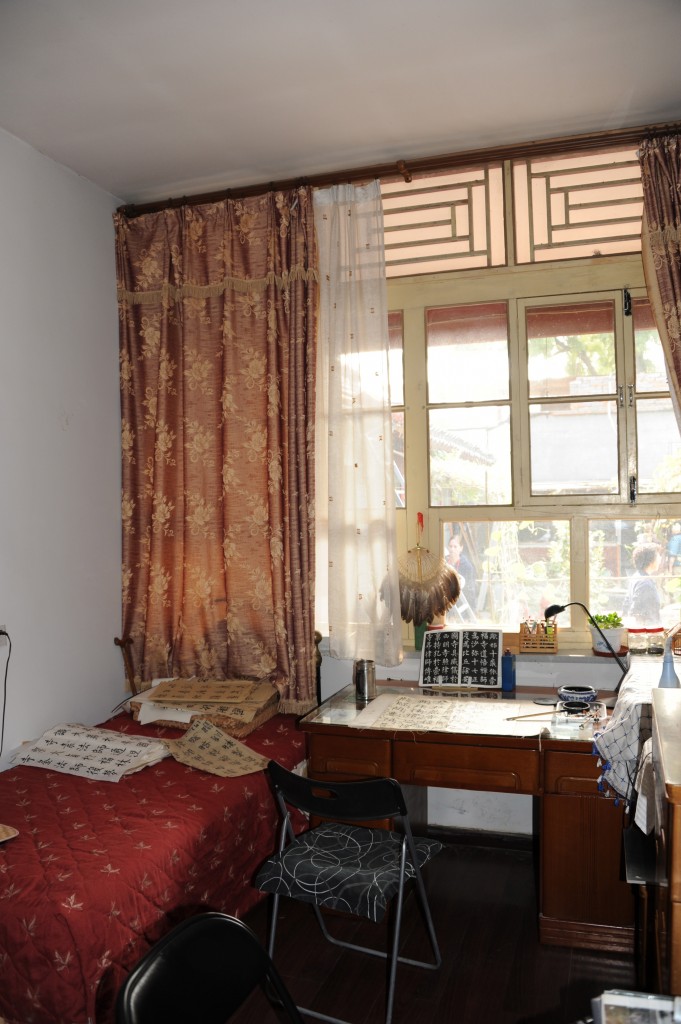 Next we went on a tour of a government run silk factory.  It was so interesting to see how they took the cocoons of the silk worms and turned it into silk.  Z was somewhat interested in seeing the huge basket of worms, but that ended his interest in anything silk. 🙂 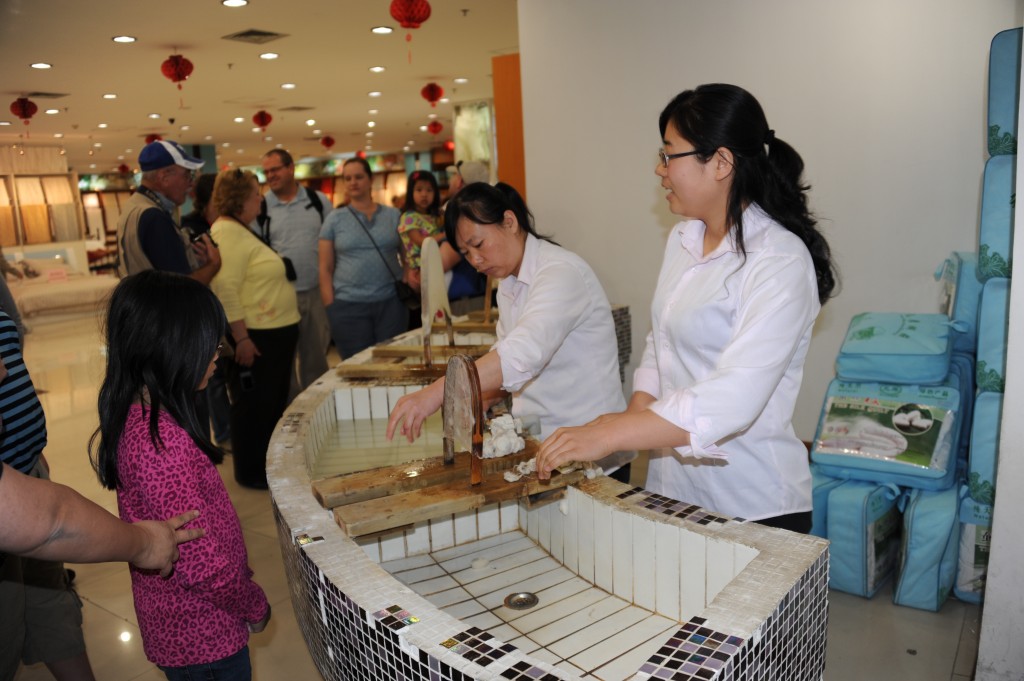 Next, we went to lunch.  We ate in “traditional Chinese style”, which meant sitting at a large round table and sharing dishes of food.  Our guide ordered everything for us and it was delicious.  We agreed that it really wan’t that much different from good Chinese food that we have had at home, but I do think they made the vegetables tastier. 🙂

From there, we walked a block down to Tiananmen Square.  We took pictures, and our 2 guides talked to us about the history, and showed us the building where the body of Mao Zedong is available for viewing for a few hours every day.  It was the last day of the Chinese National Holiday, so there were flowers and beautiful decorations all around.  One interesting fact was that while Chairman Mao was alive, he wanted to know how many years he would be in power, and how many years he would live, so he consulted a “psychic”.  The man told him  that he could not reveal the answer or he himself would not be allowed to go into Heaven.  He told him that he could offer him the number 8341, but could not translate to him what those numbers meant.  Chairman Mao became obsessed with those numbers, and had them in different places around him.  Still today, the guards have 8341 on their uniforms.  He was never able to understand what the numbers meant, but after his death, it became apparent that he died at the age of 83, and was in power for 41 years. 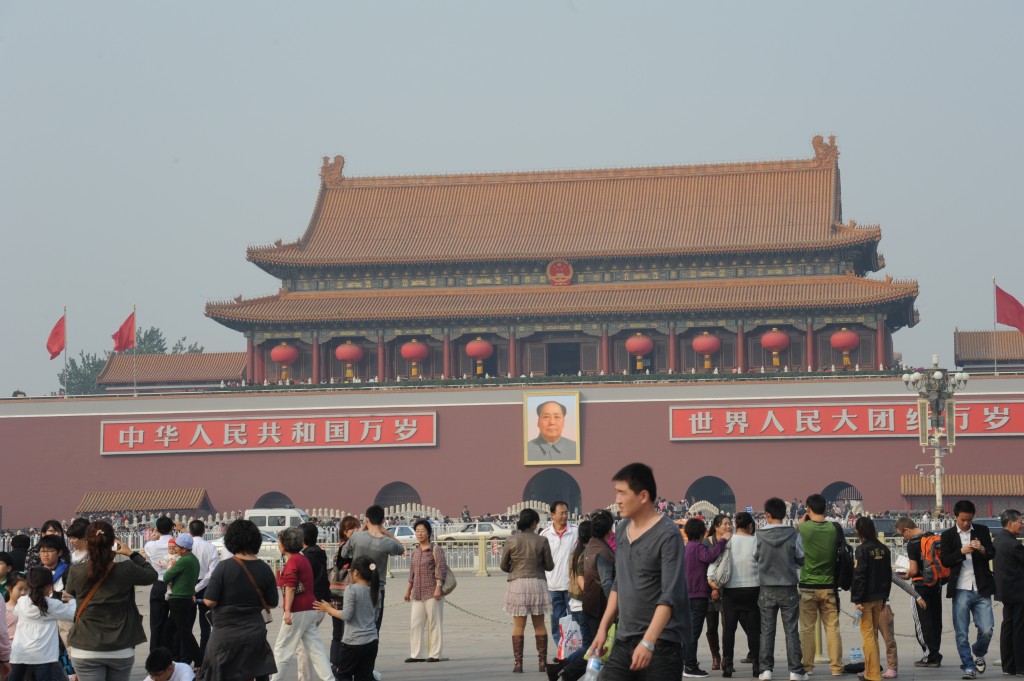 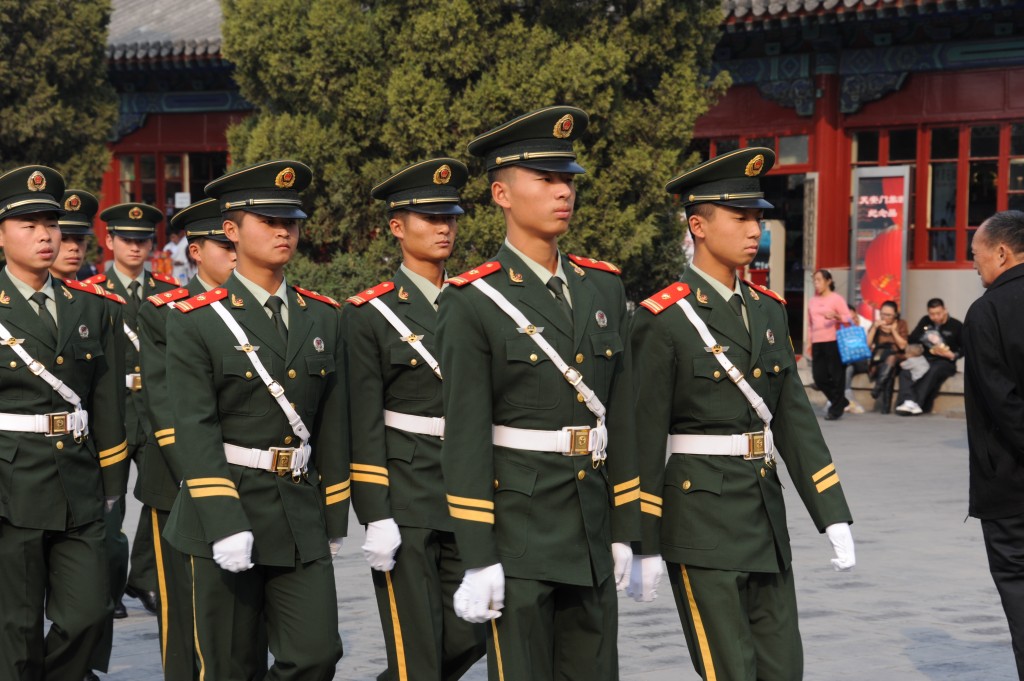 Next, we walked into the Forbidden City, or Imperial Palace.  It was amazing to walk on bricks that had been in place for over 500 years, and to hear some of the history of the expansive buildings and courtyards.  George explained that the city supposedly was built with 9,999 1/2 rooms, because it was thought that there were 10,000 rooms in Heaven, and it would have been arrogant to have as many.  We walked courtyard after courtyard, and it became obvious why it was called a city within a city.  It was enormous!  Enormous, and breathtaking. 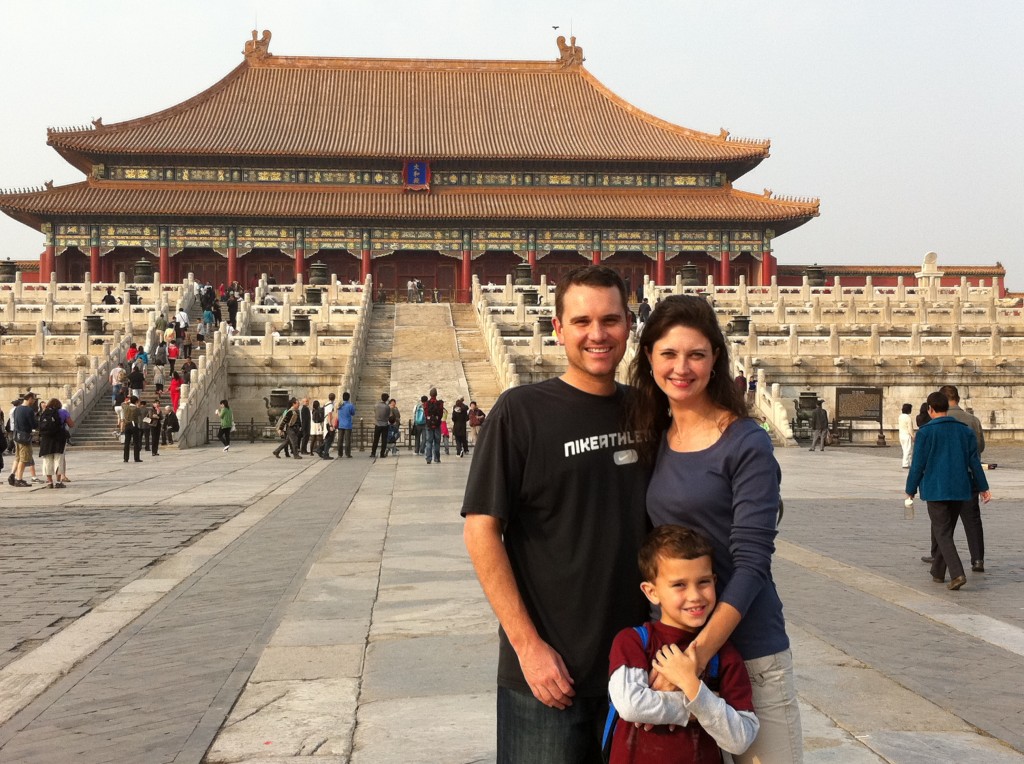 By the time we got back to the bus, all 3 of us fell asleep on the short drive back to the hotel.  We walked to dinner by ourselves, where Z chose to have a chicken sandwich from “Fat Burger”.  Then we had fun exploring a Chinese grocery store, and fell happily into bed.

One thing that I was told before our trip was that the Chinese people would be very interested in Z, as they don’t see Americans very often, especially children.  I was told that they might try to take his picture, or touch him.  We got our first taste of that, as several times people did reach out to touch him, and asked to take his picture.  The people were always friendly and nice, and Z took it in stride.

Today we will go to the Great Wall, tour a jade factory, and go to an acrobatics show.  I can’t wait!

Love and miss everyone at home!  We have spotty access to Facebook, so please leave comments here instead if possible!!!! 🙂