So, for beter or worse the holidays are over, and the kids are back at school, giving me a quiet minute at the computer.

I wanted to update on our “Santa” situation today, and then I will write again in the next few days about some of the other highlights of the holidays.

As I last wrote, D requested “Dirt Buzz” from Santa Claus.  This was actually a regular Buzz Lightyear that was just plain dirty.  For a 3 year old, he was incredibly consistent with this request.  At first, I thought it would be a passing thing, and he would soon move to another Christmas list request that Santa could fulfill.  This didn’t happen.  Every single day before Christmas he told anyone that would listen that he asked for this “Dirt Buzz”.  He took it all very seriously.  At one point, this child  looked around his room and asked me to clean it so that Santa would come bring him that Dirt Buzz.  (That was because Santa asked him if he had been keeping his room clean).  And yes, the fact that he wanted me to clean up his toys rather than doing it himself is a problem, but one I will deal with on another day and another blog.

So, picture my husband and I on Christmas Eve, outside, with D’s new Buzz Lightyear (and Woody too).  We rubbed those toys in the dirt attempting to recreate the Buzz that D loved from the Flickr slideshow.  When we thought we had a close version, we  put the muddy toys in our freezer in an attempt to solidify the dirt so we could actually put them on our couch with the other gifts from Santa.

Christmas morning comes, and D does immediately run to his new, dirty toys (even overlooking a new bike!).  He says, “COOL, A NEW DIRT BUZZ AND DIRT WOODY!!!”.  We are feeling like the morning has been a success, so we ask him to hold up his new toys for a picture.  He looks at them, looks at me, looks at them.  Then he says, “They dirty.  You wash them?”. 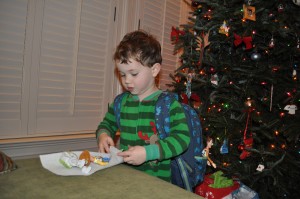 He won't even touch them!

Oh well.  As parents, we will go to any length to try to bring happiness to our children.  Sometimes we get it right, and sometimes we don’t.  In this case, we sure tried our best! 🙂