I have been meaning to write about the beginning of school, but as usual, things have been a little crazy around here. 🙂

Z started attending a Mother’s Morning Out program when he was not quite 2 years old.  At the time, I was pregnant with D, and pretty much an emotional basket case.  When we attended the beginning of the year orientation night, I cried through the whole meeting, thinking about being away from my sweet little guy for 8 whole hours a week!  (Come to think of it, this may be why my husband seems to conveniently have work meetings every year when this meeting comes up.  I’m pretty sure he was mortified about having to sit with the pregnant crying lady.  I promise that I won’t do that again, honey!).

Anyway, Z shed a few tears over the first couple of weeks of school, but all in all, most of the tears were mine.  Of course it wasn’t long before he loved going to school, and somehow I found 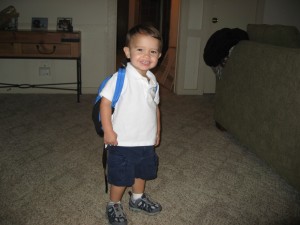 some things to do with my time. 🙂  This is a picture of Z on his very first day of school.  We still love this picture, and how proud he was of his backpack.

So, when D was almost 2, I went back and forth about sending him.  Although I thought he would eventually like it, D was very attached to me, and had difficulty being left with anyone outside his very small circle.  I was dreading trying to work this out with him.  It ended up being taken out of my hands because we moved during the summer, and the preschools near our new home did not have a slot for D.  In actuality, I was relieved.  Even though Z did it at that age just fine, I didn’t think that D was ready.  I think for D, as a now middle-child, it was really a blessing that we had that year of quality time together.  I got to take him to Gymboree and do some of the things one-on-one with him that I had done with Z, but had never been able to do with D, as my second child.

This year, however, I felt like D was ready to join Z at preschool.  He is a busy, busy, busy guy, and keeping him stimulated throughout a day is hard, so I really thought he would benefit from a few mornings in preschool.  Besides, the little guy misses Z so much when he isn’t home, I really thought it would be good for him.

I tried talking it up for weeks before school started.  He mostly appeared to be ignoring me, but would occasionally say, “no, I will stay home with Mommy”.  I was worried then that we might have a problem.  He went to his class party before school started, and luckily there were cookies, so he did pretty well.  Then came the first day of school.  I dropped my two boys off at carpool, and he got out of the car hesitantly, but without tears.  I drove away from the school in a state of shock.

That afternoon, I was the first car in line for pick-up.  I think that will tell you something about my anxiety level during the day that he was gone.  I knew the news wasn’t good when one of the head women of the school brought him to the car.  She opened the door and said, “well, he settled down after a while.”  Uh-oh.  I said, “I guess that means that he WASN”T settled for a while??”.  Pretty much what I expected.  One of my friends’ children came home and told her mom that D just cried and cried at school.  🙁  Oh, how that broke my heart.

Then it got worse.  The second day, that little guy was NOT going to get out of the car.  I unfastened his carseat, and he jumped into the back of our minivan, got down on the floor in the corner, and refused to move.  I had to park the car, and attempt to coax him out.  He finally go out with me, but held on with a death grip as his teacher tried to pry him out of my arms.  He finally went with her, but continued crying, “No, MOMMY!!”  Ahhh-  talk about ripping my heart out!  It was terrible!!

The next few drop-offs were slightly better.  He seemed to like his teacher, and would at least go with her.  She told me that he was really doing fine with the exception of bursting into tears any time he saw Z.  Poor guy.

Fast forward a few weeks, and he seems to be doing well!!  He is getting out of the car happily, and getting back in happily.  He somehow has already learned the classic line that kids give parents, however.  Me- “What did you do at school today?”  D-  “Nothing.”  That is all I can get!!  He is not even 3 yet!!  Oh well.  At least he has a smile on his face! 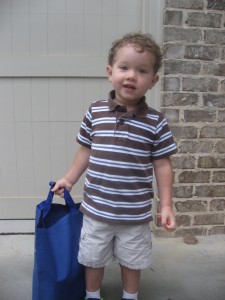