My aunt told me a funny story about when my cousin, John was little.  She said that one time after John fell, she brushed him off and sent him on his way.  The next day she took him to the doctor because he had such a bad headache.  It turned out that he had a broken arm.  A different time, she rushed him to the doctor because he was limping around the house.  This time, it turned out that he had a sock stuck in the cowboy boot he was wearing.  I loved these stories, because I felt in such good company in not always knowing what to do with sick kids.

Last week I had my first experience with all 3 kids sick at the same time.  It was a rough week.  Mostly, I felt heartbroken, because when I have a sick child, I want to just hold them and love on them until they feel better.  When there were 3 of them though, and one of them is a small baby, it was simple survival mode.  Give this one medicine, give this one juice, take a temperature, rock the baby.  I love them all so much, I hated that I couldn’t be there fully for any of them.  I am guessing that this is only the first of many times in their childhood that they will all be sick with something, so I hope to find a better way of coping.

I am really not one to rush to the doctor with every sniffle that my kids have.  95% of the time that I have taken them in for something, the doctor says, “It is just a virus.  It will pass”.  I don’t need a 30 minute car trip, plus a long wait in the waiting room to hear that.  So, I generally try to give them time to get better.  This past weekend though, the baby worried me.  She had a fever for a couple of days, wouldn’t sleep, was crying a lot, and then began refusing to eat.  Finally, I put her in the car and went to Urgent Care since it was a Saturday late afternoon.  When we got there, she promptly stopped crying.  She didn’t register a fever, played with the doctor, and even agreed to eat.  Sigh.  The doctor was very nice as he said, “I can’t find anything wrong with your baby”.  Of course I would rather that be the case, but did she have to have a spontaneous recovery as soon as we were able to see a doctor?  I wanted to tell him that I wasn’t one  of those hysterical moms who  takes my kids to the doctor for no reason, but I figured the evidence was not exactly in my favor. Oh well.

Luckily, everyone seems to be feeling better now.  My house, however, suffered extensive damage from our sick week.  I am trying my best to motivate myself to clean it.  Of course, I had to stop to write a blog post first. 🙂 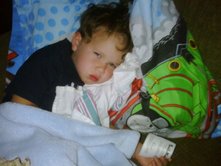 2 Responses to The Sickies